Getting Started with Google BERT

In this long read we take a look at BERT (bidirectional encoder representations from transformer). BERT has revolutionized the world of natural language processing (NLP) with promising results. This long read is sampled from Sudharsan Ravichandiran’s book Getting Started with Google BERT.

Getting to grips with BERT

If you’ve been following developments in deep learning and natural language processing (NLP) over the past few years then you’ve probably heard of something called BERT; and if you haven’t, just know that techniques owing something to BERT will likely play an increasing part in all our digital lives. BERT is a state-of-the-art embedding model published by Google, and it represents a breakthrough in the field of NLP by providing excellent results on many NLP tasks, including question answering, text generation, sentence classification, and more.

Here we are going to look at what BERT is and see what is distinctive about it, by looking in a relatively high-level way (eschewing the underlying linear algebra) at the internal workings of the BERT model. By the end you should have if not a detailed understanding then at least a strong sense of what underpins this modern approach to NLP and other methods like it.

BERT stands for Bidirectional Encoder Representations from Transformers. As we’ve said, it’s a state-of-the-art embedding model from researchers at Google. By calling it an embedding model we mean that, fed with natural language input, it generates vector-based representations – embeddings – of those inputs. One of the major reasons for BERT’s success is that it is a context-based embedding model, unlike other popular embedding models, such as word2vec, which are context-free.

Sentence A: He got bitten by a python.

Sentence B: Python is my favorite programming language.

BERT, on the other hand, being a context-based model, will understand the context and then generate the embedding for the word based on that context. So, for the preceding two sentences, it will give different embeddings for the word ‘python’, according to the context.

Thus, unlike context-free models such as word2vec, which generate static embeddings irrespective of the context, BERT generates dynamic embeddings based on the context. How does BERT do that?

Bidirectional Encoder Representations from Transformers (BERT), as the name suggests, is based on the transformer model. Let’s investigate what that means.

Recurrent neural networks (RNNs) and Long Short-Term Memory (LSTM) networks are widely used in sequential tasks such as next word prediction, machine translation, text generation, and more. However, one of the major challenges with the recurrent model is capturing long-term dependency.

To overcome this limitation of RNNs, a new architecture, called the transformer model, was introduced in the paper Attention Is All You Need. The transformer is currently the state-of-the-art model for several NLP tasks, and has paved the way for revolutionary new architectures such as BERT, GPT-3, T5, and more.

The decoder takes the encoder’s representation as input and generates the French sentence as output: 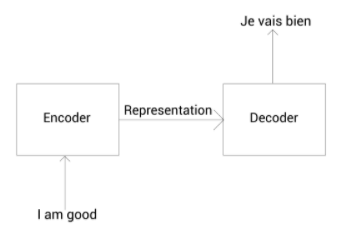 Encoder and decoder of the transformer 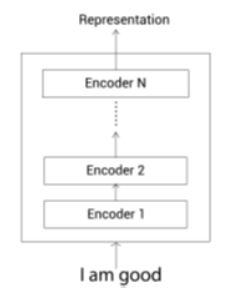 A stack of N encoders

Note that in the transformer paper Attention Is All You Need, the authors used N = 6, meaning that they stacked up six encoders one above the another. However, we can use different values of N. For simplicity and better understanding, let’s keep N = 2: 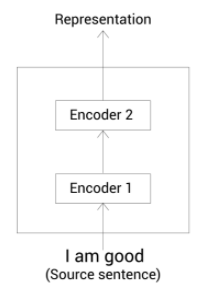 A stack of encoders

Now how does the encoder work? How is it generating the representation for the given source sentence (input sentence)? The following figure shows the components of the encoder: 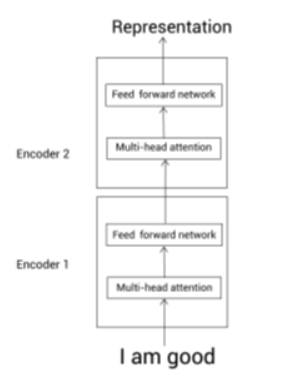 Encoder with its components

Actually there’s rather more to it than that. The multi-head attention block can be thought of as a sophisticated method for computing, from input word embeddings, the self-attention values of words, which is a way of allowing the transformer to understand how one word is related to all the other words in the expression. The following figure shows encoder internal structure in more detail: 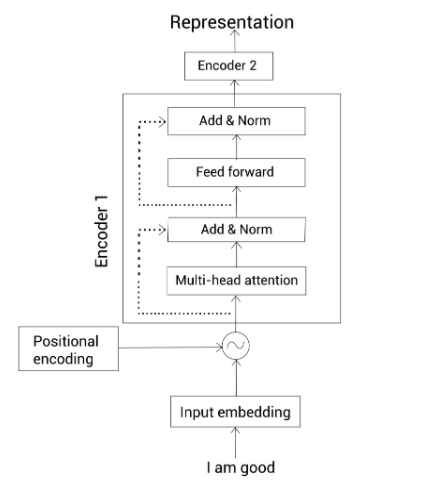 A stack of encoders with encoder 1 expanded

Consider the input sentence I am good. In RNNs, we feed the sentence to the network word by word. That is, first the word I is passed as input, next the word am is passed, and so on.

We feed the sentence word by word so that our network understands the sentence completely. But with the transformer network, we don’t follow the recurrence mechanism.

So, we should give some information about the word order to the transformer so that it can understand the sentence. That’s what positional encoding accomplishes.

Now, going back to the ‘stack of encoders’ image, we see the following:

1. First, we convert our input to an input embedding (embedding matrix), and then add the position encoding to it and feed it as input to the bottom-most encoder (encoder 1).

2. Encoder 1 takes the input and sends it to the multi-head attention sublayer, which returns the attention matrix as output.

4. Next, we take the output obtained from encoder 1 and feed it as input to the encoder above it (encoder 2).

In the previous section we saw that we feed a sentence as input to the transformer’s encoder and it returns the representation for each word in the sentence as an output. Well, that’s exactly what BERT is – Encoder Representation from Transformer. Okay, so what about that term Bidirectional?

The encoder of the transformer is bidirectional in nature since it can read a sentence in both directions. Thus, BERT is basically the Bidirectional Encoder Representation obtained from the Transformer.

Let’s understand this better using the same sentences we saw in the previous section. 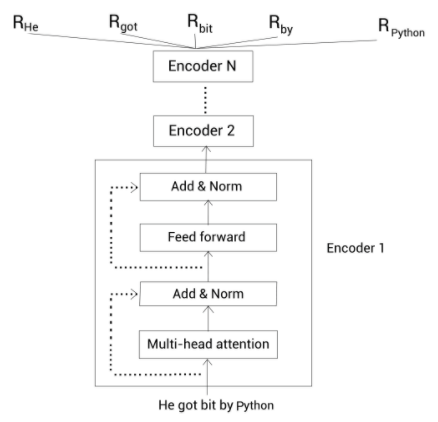 BERT generating the representation of each word in the sentence

Similarly, if we feed sentence B, ‘Python is my favorite programming language‘, to the transformer’s encoder, we get the contextual representation of each word in the sentence as output, as shown in the following diagram: 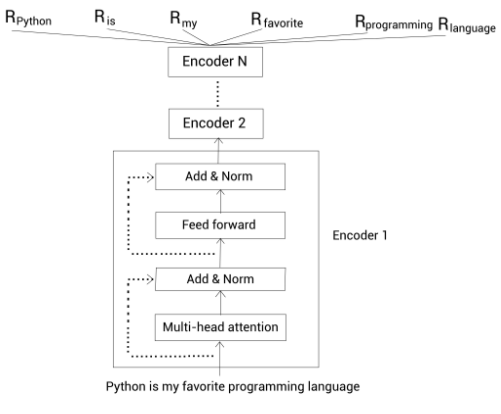 BERT generating the representation of each word in the sentence

The BERT’s developers have made the model available in two standard configurations:

BERT-base consists of 12 encoder layers, stacked one on top of the other. All the encoders use 12 attention heads. The feedforward network in the encoder consists of 768 hidden units. Thus, the size of the representation obtained from BERT-base will be 768.

We use the following notations: 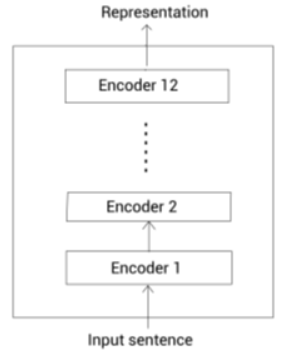 BERT-large consists of 24 encoder layers, each stacked one on top of the other. All the encoders use 16 attention heads. The feedforward network in the encoder consists of 1,024 hidden units. Thus, the size of the representation obtained from BERT-large will be 1,024. 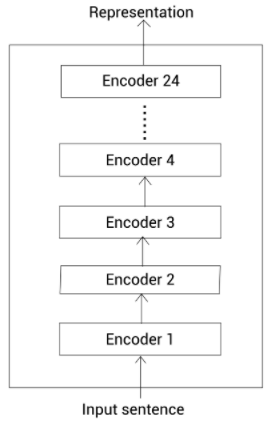 Apart from the preceding two standard configurations, we can also build the BERT model with different configurations. We can use smaller configurations of BERT in settings where computational resources are limited. However, the standard BERT configurations, such as BERT-base and BERT-large, give more accurate results and they are the most widely used.

At this point you might well be thinking that this is all very well, but it’s rather abstract and theoretical. What can the BERT model be used for, and how would we set about using it? To the first question, we need just say here ‘a wide variety of problems in NLP’, since BERT captures and expresses in its output representations so much of the context that matters in language processing. Examples include such classic problems as text summarization (of both extractive and abstractive kinds), classification tasks such as sentiment analysis, and translation.

In terms of how BERT is used, it is important to note that it acts not on raw words but rather on text tokenized into WordPieces. And typically, the pre-trained BERT models are used as a starting point, with fine tuning then being performed in a subsequent training stage against input data relevant to the specific task and domain at hand.

The advent of BERT represents a shift in the tectonic plates of natural language processing. Using a Transformer-based architecture, the BERT model captures enough of the nuance of language to allow hitherto tough NLP problems to be tackled successfully. This opens up new digital vistas, and promises – dare one say it – to transform the nature of our relationship, through language, with computers. Moreover, approaches to NLP based on BERT and its kin offer hope that it will indeed be possible to meet the challenge posed by the sheer quantity of text held globally in digital form. 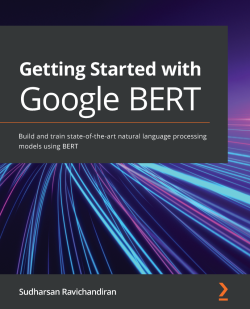 Getting Started with Google BERT

Kickstart your NLP journey by exploring BERT and its variants such as ALBERT, RoBERTa, DistilBERT, VideoBERT, and more with Hugging Face’s transformers library

Features
○ Explore the encoder and decoder of the transformer model
○ Become well-versed with BERT along with ALBERT, RoBERTa, and DistilBERT
○ Discover how to pre-train and fine-tune BERT models for several NLP tasks 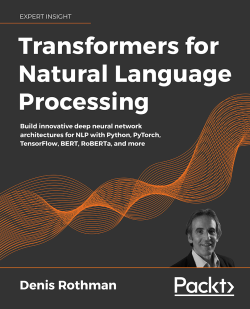 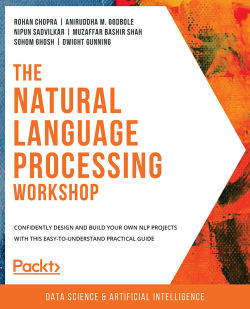